This heartburn medication increases your risk of dementia by 44% 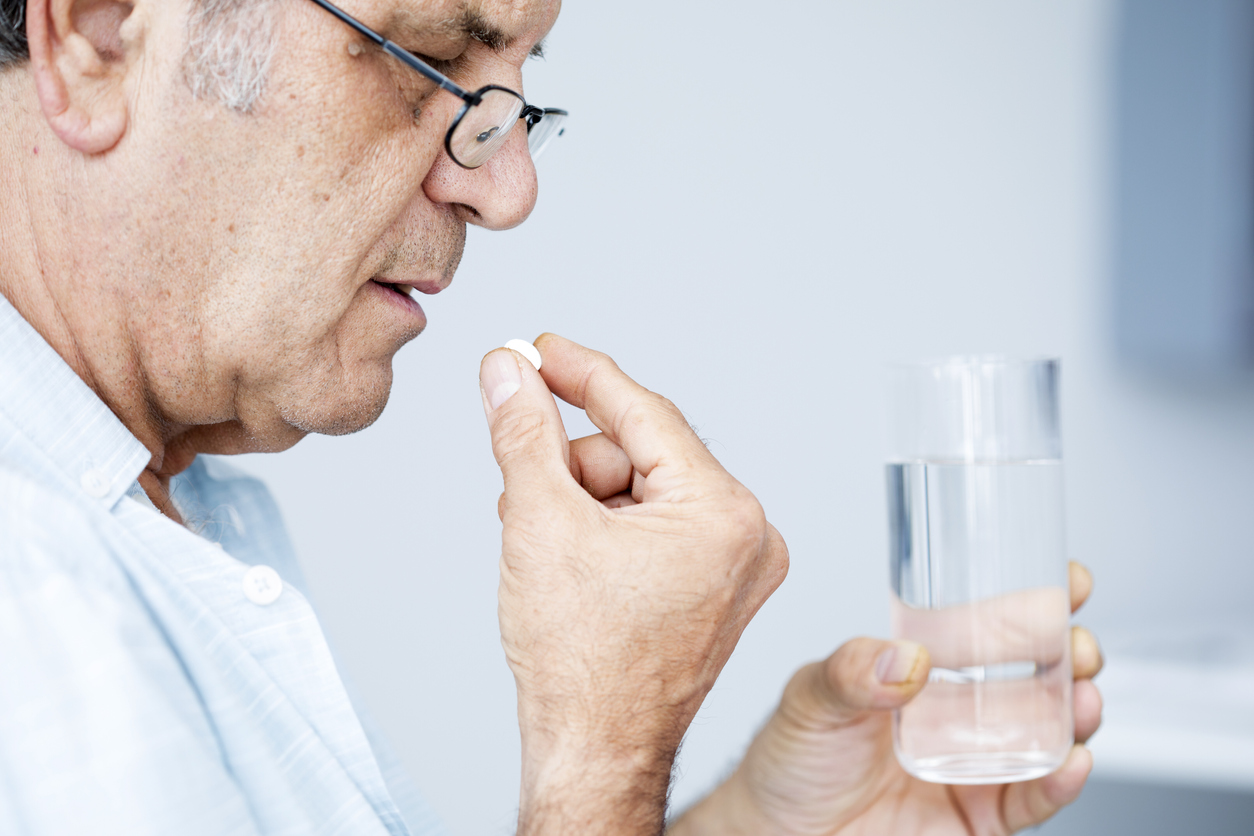 Some feel it invade after a heavy meal. Others know they can expect it after certain foods. At any rate, heartburn is a dreaded discomfort which affects more than 60 million Americans per month and 15 million per day, according to the American College of Gastroenterology. Over the counter medications have become a go-to solution for men looking for pain relief. But a popular type of heartburn medication could dramatically increase your risk for dementia, a study found. Read on to see which pills might be of concern.

A study published in the journal JAMA Neurology in February 2016, investigated any possible link between the over-the-counter proton pump inhibitors (PPIs) commonly used to treat heartburn, gastroesophageal reflux disease (GERD) and peptic ulcers and the onset of dementia. A research team analyzed data from 73,679 participants aged 75 or older who were found not to have dementia. They then checked the chronic consumption of PPIs such as omeprazole, esomeprazole and pantoprazole, sold under the brand names Nexium, Prilosec and Protonix respectively, defined as the use of at least one prescription every three months over an 18-month period.

The team then followed up with participants after eight years to assess how many had been diagnosed with cognitive decline. The results showed that those who took the heartburn medication regularly had a 44% higher risk of dementia than participants who did not take the medication.

The results also found that men taking PPIs were at slightly higher risk than women, and participants who took them only occasionally were at much lower risk overall. But despite the results, the study’s authors stressed that more research was needed to establish a link beyond a statistical association between heartburn drugs and dementia.

“To assess the cause and effect relationships between long-term use of PPIs and possible effects on cognition in the elderly, prospective randomized clinical trials are needed” Britta Haenisch, MD, PhD, one of the study authors from the German Center for Neurodegenerative Diseases in Bonn, said in a statement. She clarified that at this time, “clinicians should follow the guidelines for prescribing PPIs, to avoid prescribing too much PPI and inappropriate use.”

RELATED: Notice It Late Afternoon? Get tested for dementia, says the Mayo Clinic.

Although more research is still needed, the relationship between medicines for heartburn and dementia observed in the study was explored. Previous research has shown that PPIs may be able to cross the blood-brain barrier more easily in the elderly as it becomes more porous, allowing them to interact with specific enzymes and ultimately leading to increased levels of amyloid proteins. -beta and tau which are associated with Alzheimer’s disease. And other studies have shown that using PPIs can vitamin B12 deficiency, which is also associated with dementia, according to WebMD.

“There may still be other mechanisms at work which are unknown”, Houman Javedan, MD, clinical director of hospital geriatrics at Brigham and Women’s Hospital in Boston who was not involved in the study, told Harvard Health Publishing. “But this study raises the question of whether chronic PPI use is safe, especially among the older population.”

For more health information sent straight to your inbox, sign up for our daily newsletter.

Experts say the study results also reveal the tendency of many patients to continue on medical regimens that they may no longer need. â€œSeniors take more medications as they get older and often continue with them long after they’re still needed,â€ Javedan told Harvard Health Publishing. “Either they get used to taking it and don’t think about asking their doctor if they should stop, or they’re afraid of what might happen if they do.”

Still, others plan to use the connection established in the study to allow patients to make decisions on medication. “I will disclose the results to my patients and then let them decide if they will take the risk or not” Malaz Boustani, MD, professor of medicine at the Indiana University Center for Research in Aging and spokesperson for the American Federation for Research on Aging, told WebMD.

According to Boustani, anyone looking to get rid of heartburn medications can often do so by taking preventative measures to reduce excess acid and prevent acid reflux. He suggests avoiding large meals and overeating, not lying down for a few hours after eating, and avoiding certain triggers like caffeine and chocolate.

RELATED: If You Can’t Hear While Doing This, Your Risk For Dementia Is 91% Higher.