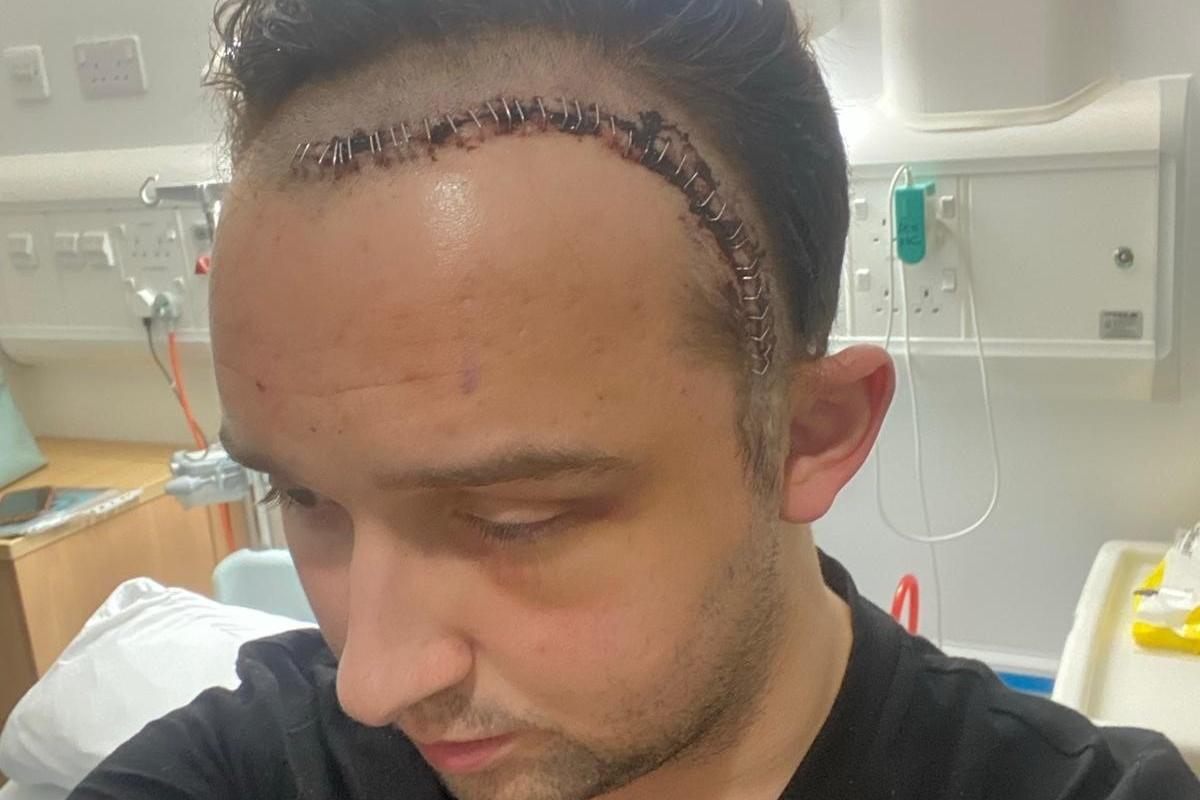 A man who was diagnosed with a terminal brain tumor was prescribed headache tablets and told by a doctor that ‘the mind can do fun things’ before the cancer was discovered.

Scott McBride made five trips to his doctor before finally being sent to Edinburgh Royal Infirmary in October 2021, where a CT scan found the 10cm glioblastoma brain tumour. The 28-year-old said: “The doctor said it was a terminal diagnosis and I wouldn’t get over it. He said I was only a few years old which was a big shock. I really didn’t expect that.”

He now plans to raise money for the Brain Tumor Research charity and will take part in a 10km fundraising walk for the cause. Staff at Edinburgh Hospital said the tumor had been growing for several years and the pressure was causing migraines. For nearly a year, Mr McBride suffered from headaches and physical episodes, which later turned out to be seizures.

Scott McBride after his operation to remove a brain tumor. Photo: Brain Tumor Research/PA Wire NOTE TO EDITORS: This photo may only be used for editorial reporting purposes for the contemporaneous illustration of events, things or people in the image or facts mentioned in the caption. Reuse of the image may require additional permission from the copyright holder.

It was November 2020 when the financial crime associate first realized something was wrong. “I had a little tingling sensation on the right side of my body,” he said. “Then one day on my way to work my foot slipped like it was on a wet leaf, but the sidewalk was clear and dry.”

He contacted his GP but was told ‘the mind can do fun things’ and to call back if his symptoms got worse. But, in January, the tingling was daily and the physical episodes began.

“At work, I was holding my computer mouse for 30 seconds and couldn’t let go of it, like my hand was locked,” he said. “I couldn’t speak. I had to hang up on customers because I couldn’t get my words across. I had to call them back afterwards, claiming there had been a problem with the phone line. It happened three times a day.”

In June, Mr McBride, from Midlothian, suffered from attacks around six times a day as well as migraines. “I had never had headaches before, but they were so bad that I had to come home from work. My manager thought I was depressed,” he said. On his fifth visit to the GP, when he told his doctor that migraine medication was not helping him, he was referred for the scan which would reveal the fatal diagnosis.

He has since undergone life-prolonging treatment, including radiotherapy and chemotherapy, but there is no cure for his tumour. In November 2021, Mr McBride underwent an awake craniotomy, a type of procedure performed on the brain while you are awake and alert that helps neurosurgery remove only damaged tissue.

“The operation went very well and they were able to remove over 90% of the tumor,” he said. “Then an MRI showed a large black space where the tumor was. I felt really good and haven’t had any seizures since.”

With family and friends, the group will circle the Glencorse Reservoir and up Scald Law, the highest of the Pentland hills on Saturday. “The walk will provide great views of where I was raised and is a great way to raise money for research to help others with this disease,” he said. declared. “I think it will be emotional, but it will be great to see everyone, and it should be a good day.”

Matthew Price, community development manager at Brain Tumor Research, said: “We are sorry to hear of Scott’s diagnosis, but we are delighted to hear how well he is doing.” Mr Price added that the money raised meant the charity was “able to advance our brain tumor research, improve options and outcomes for patients like Scott and ultimately find a cure for all types of brain tumours”.