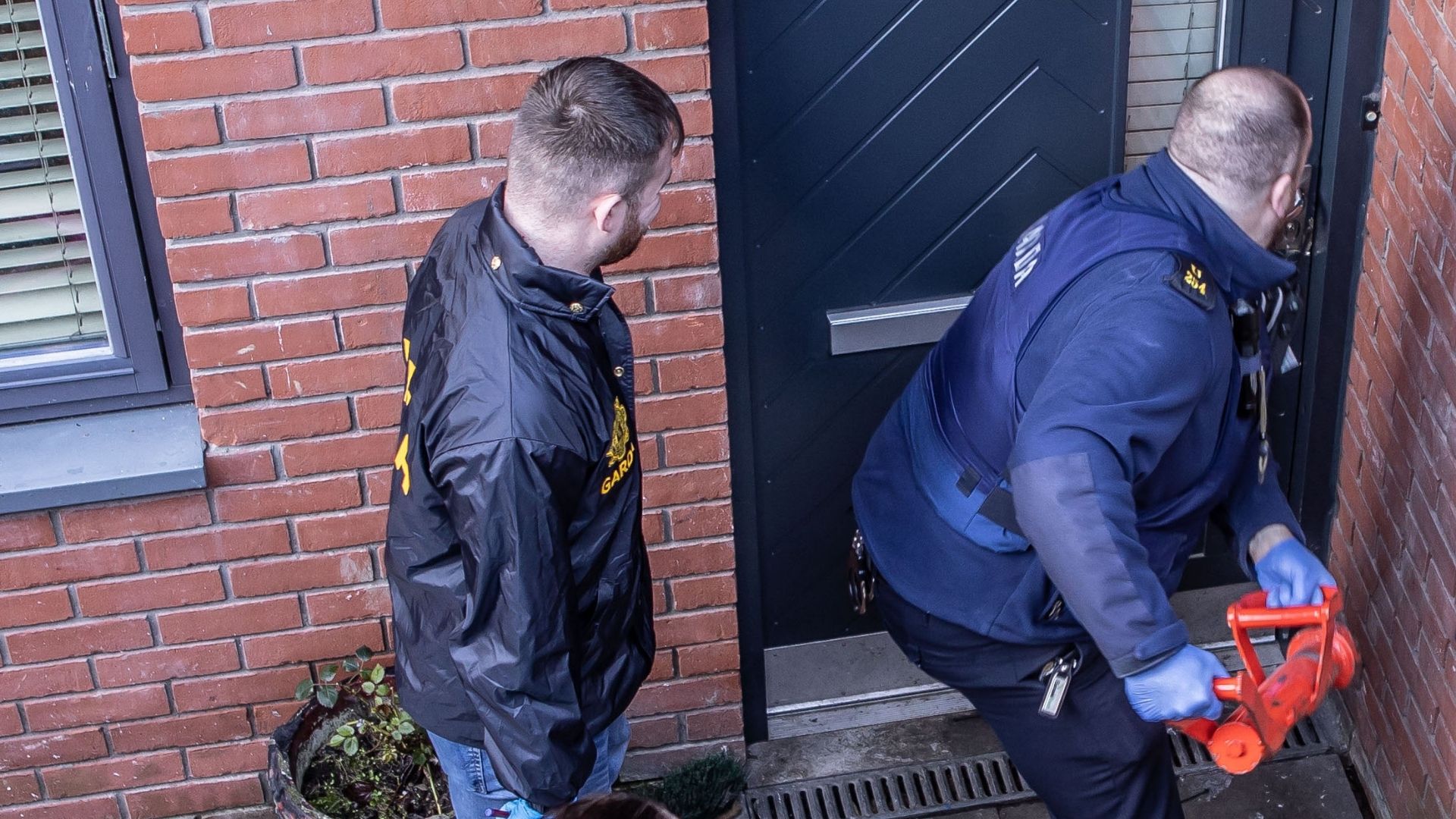 This is when Gardai launched a crackdown on street-level drug trafficking in Dublin’s North City Centre.

Our exclusive footage shows officers from the Garda District ‘U’ Community Response Team diving into the property of a suspected dealer.

Once inside, the property was secured before a woman was arrested on suspicion of drug offences.

The recent operation was launched in response to residents’ concerns over the sale of prescription drugs and pills.

Areas targeted in the past include Summerhill and Ballybough.

The CRT team, established in May 2019, is based at the new Fitzgibbon Street Garda station and is also part of the area’s Community Policing Team.

Other footage shows crime prevention teams on patrol in a park and searching for suspects walking through the area. Another shot shows the moment a car is searched for drugs.

The team is led by a Sergeant and seven Guardsmen, who operate under the command of Superintendent Martin Mooney and Insp Emer Curran.

“Concerns raised by local residents, politicians or business representatives will be thoroughly investigated.

Most read in The Irish Sun

“We have received great support from the local community and will continue to work in partnership with them.

“Every member of the team is dedicated to serving the needs of the community and they are all Community Rangers.”

As part of their duties, they are also tasked with identifying suspects who use slingshots to throw drugs into Mountjoy Prison.

Gardai believes that criminal gangs inside – including stragglers from the Kinahan Cartel – recruited low-level dealers to funnel the drugs into the prison.

Recent figures show that the gardai make between three and four drug seizures near the prison each week. But CRT teams have stepped up patrols around the high-security prison to keep illegal substances out.

A prison source told us: “The gang leaders have people on the outside who are experts in the use of slingshots.

“Their job is to bring drugs into the prison and once they do that they get paid.

“Their salary depends on what they earn, but the gardai know some of the people involved in this exercise well.

“They seem to be using the same people, but that’s a problem the prison will continue to address.”

TEAM UP WITH HOSPITALS

During their operations, the CRT team also discovered a cannabis cultivation factory in Cabra. And officers also work closely with their colleagues in the Garda Extradition Unit to execute European Arrest Warrants.

Last month, the team was involved in the arrest of a woman wanted in Poland for fraud. And they are responsible for responding to areas where a high number of burglaries and car break-ins occur.

Supt Mooney added: ‘Once we have reports of a high number of burglaries we will focus our resources in the area with increased patrols. The team also has covert ops when involved in investigations.

Another part of their job is to work closely with Rotunda and Mater hospitals.

Superintendent Mooney said: “We are working with hospitals on crime prevention issues.

“The main problems we have in hospitals are public order, bicycle theft and other forms of theft.

“I meet regularly with the various stakeholders and would convey their concerns to the team.”

In a recent incident, a suspected burglar who broke into a property belonging to the Mater was arrested after being identified on CCTV.

In another, a suspect was arrested after he was caught breaking into cars at Glasnevin Cemetery. The deputy mayor of the capital, Joe Costello, welcomed “the emphasis placed by the gardai on community policing”.

The Labor Party representative said: “It is great to see the gardai responding to the needs and concerns of the local community.

“We are delighted that the new station is operational after many campaigns.”

Mr Ring said: “The work of this unit is very important in meeting the needs of the local community.

“It is also important that the gardai are able to respond to concerns that have been raised so that they can be properly addressed.

“Policing is very important in this area and I commend the gardai’s commitment to working closely with the community.”