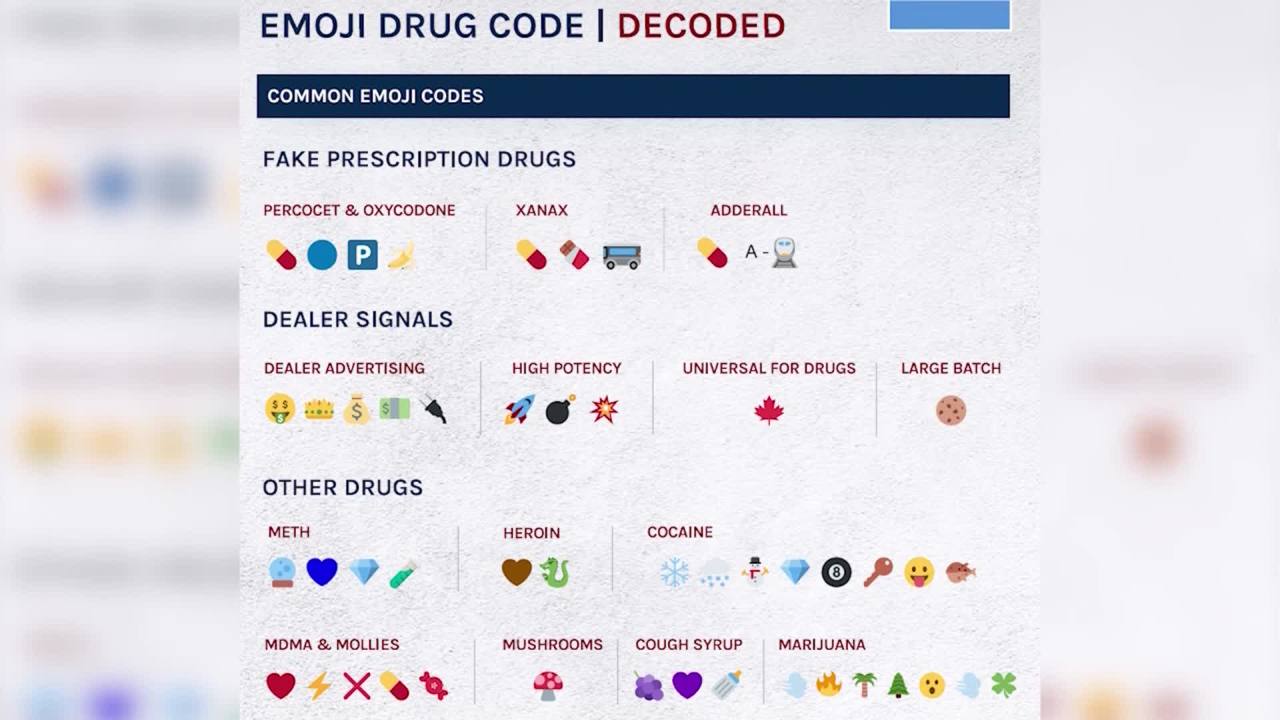 CLEVELAND (WJW) — They look innocent enough, but the United States Drug Enforcement Administration (DEA) is warning the public about a secret emoji code used by drug dealers and teenagers.

The DEA has released a decoder reference guide for parents, caregivers, and educators to not only inform them, but to save lives.

“When there’s an overdose and you’re trying to track the source, you go through phones and computers and we often see these emojis in those conversations,” said DEA public information officer Brian McNeal. .

Some of the emojis are obvious, like a pill representing fake prescription drugs, but others seem much more benign.

For example, a blue heart is for meth, a brown heart for heroin, and a key emoji represents cocaine.

A banana can also be code for Percocet & Oxycodone, while a palm tree, Christmas tree, clover, and cloud can all represent marijuana.

Others are less obvious, including a candy bar for Xanax.

“Some I could see, like the dragon for the heroine, but the chocolate bar, I was like, ‘oh okay, that’s news,'” McNeal said.

The pills are “fake/counterfeit” prescription drugs and all drugs potentially laced with lethal amounts of fentanyl, which inspired the DEA’s #ONEPILLCANKILL campaign.

“We find fentanyl mixed in with everything,” McNeal said, “If the DEA were to seize 100 counterfeit pills right now, 42 would contain a lethal dose of fentanyl.”

The DEA also found colored methamphetamine-containing pills that look like children’s vitamins and other pills marked as hydrocodone carried in candy bags, all of which contained fentanyl.

“This is an extremely serious issue,” McNeal said.

In early March, the US Military Academy at West Point confirmed that at least two of the school’s cadets, including a football player, were involved in a situation in which six people overdosed on cocaine containing fentanyl in a Florida house during spring break.

Two of the six were in critical condition.

For more information, or to report suspected illegal drug production and activity, go to the DEA’s website tip line on their website.